Todd Bachelder will have to recalibrate his family’s vision for a new future — one closer to Springfield, Mass., than Newport, Vt. 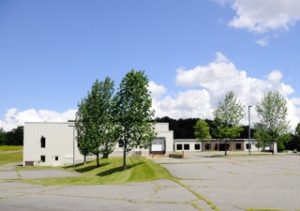 The former site of Bogner skiwear and sporting goods in Newport, Vt., was planned to house the North American headquarters of the German window manufacturing company Menck. Plans for the immigrant-funded project fell through in September. Photo by Hilary Niles/ VTDigger

The CEO of Menck Windows said he and his wife were looking forward to moving from Maine to the shores of “beautiful Lake Memphremagog” in the Northeast Kingdom. Bachelder had been working with Jay Peak co-owners Bill Stenger and Ariel Quiros to establish the German window manufacturing company’s North American headquarters in Newport.

Stenger announced Sept. 13 that plans to bring Menck to Newport had fallen through because the parent company’s new equipment requirements would cut into the plant’s job creation projections. It turns out slow sales projections and facility constraints also played a role.

Menck still is moving forward to establish itself in North America: but not in Vermont, and not with EB-5 immigrant funding.

The EB-5 Immigrant Investor program, championed in Congress by Sen. Patrick Leahy, provides a two-year conditional visa to would-be immigrants who invest between $500,000 and $1 million in an American business. As long as 10 jobs are created directly or indirectly by that investment within two years — or, as long as 10 jobs’ worth of economic activity can be attributed to the investment — the visa turns into a green card.

Job creation and generally boosting economic activity is the program’s stated goal — and also, in Menck’s case, the hitch.