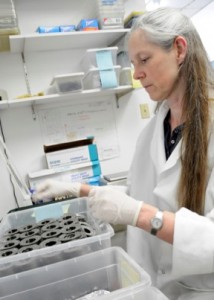 Donna Chizmar heads up the cleaning department and manages inventory for Metal Flex. Components are counted by hand and using automated technology. Photo by Hilary Niles/VTDigger

The manufacturing company is the sole supplier of carbon-fiber fuel gauges for Black Hawks, plus Boeing’s CH-47 Fox model Army helicopters, an entire line of auxiliary fuel tanks by Robertson Fuel Systems, and the experimental Sikorsky X-2 helicopter that holds a helicopter speed record of 259 mph.

Air prowess was on display Thursday at the Burlington International Airport for the state’s first Aerospace and Aviation Trade Show, hosted by the Vermont Chamber of Commerce.

“We’ve never had a trade show just for the aerospace and aviation industries,” said Chris Carrigan, the chamber’s vice president of business development.