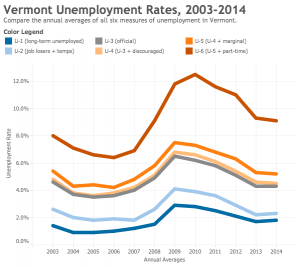 At 3.3 percent, the state’s official jobless rate remained second lowest in the nation in May, the most recent month for which estimates are available. The official rates from the Vermont Department of Labor only include jobseekers who have been looking for work for a four-week period. Averaged annually, the official rate in Vermont was 4.3 percent in 2013.

Economist Tom Kavet of Kavet, Rockler & Associates, who consults for the Vermont Legislature, said in a normal economic recovery, he would expect the number to have come down more by now.

“Things are getting better, but we’re not back to anything near full employment,” Kavet said. “A lot of people would like to work more but are not able to.”

The federal government estimates unemployment six different ways to account for different segments of the workforce. Here’s a rundown, with more detail at the U.S. Bureau of Labor Statistics.