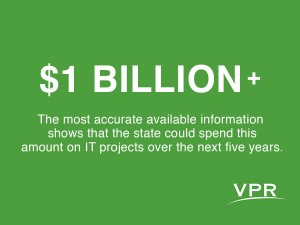 The use of technology in Vermont state government went from a background concern to a political flashpoint throughout the troubled rollout of Vermont Health Connect, the state’s online health insurance exchange. None of the state’s IT projects receive the same level of public scrutiny, but information technology in state government is ubiquitous and makes up a significant — yet unknown — portion of the state’s budget every year.

A Vermont Public Radio investigation has found that it’s nearly impossible for Vermonters to know how much of their tax money goes toward IT operations in the state, how successful IT projects are in meeting state needs, or how well state agencies follow defined protocols for state contracts.

Using available records, interviews and dozens of documents released in response to multiple records requests, VPR built a comprehensive data base of IT projects across state government. The documents and interviews showed: