As Vermont’s state government takes its first baby step into the giant world of open data, the state’s civic hackers are lining up to help.

Harry Bell of Vermont’s Department of Information and Innovation announced Tuesday that the state would be stepping out of its website shell and into the “open data” movement — a growing international trend toward making government data more available to the public. 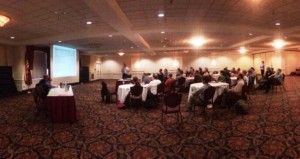 In line with principles of “proactive disclosure,” which makes public information freely available before anyone has to ask for it, open data is the product of a systematic methodology that seeks to catalog, structure, unify and publish as much government data as possible.

At an Open Data Consortium in Montpelier Tuesday afternoon, coordinated by the Vermont Center for Geographic Information, Bell described his job as using the Internet to facilitate communication between the state and the rest of the world. To date, that communication has consisted of a hodgepodge system of websites, most cut off from each other by separate back-ends and proprietary formats.

“The rest of the state’s interaction with open data kind of starts with last week on Tuesday,” Bell said.

And he wasn’t kidding.