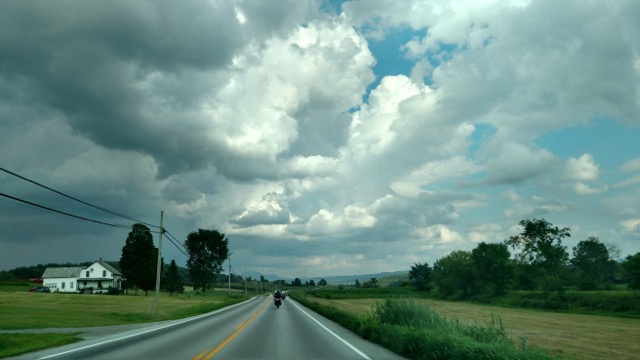 A group of investors has been traveling Vermont on motorcycles this week to get pitched by local entrepreneurs with varying approaches who are looking for money and advice.

Six new and aspiring businesses made their case to a group of motorcycle-riding investors and entrepreneurs at Green Mountain Harley-Davidson in Essex Junction Monday morning as part of the fourth annual “Road Pitch” tour of Vermont. (Photo courtesy of Road Pitch.)

Entrepreneurs like Prince Awhaitey, whose fledgling fresh juice business, Healthy Kingdom, is about promoting good nutrition and healthy living. But, as Awhaitey told an audience Monday morning in the showroom of Green Mountain Harley-Davidson in Essex Junction​, it’s actually people’s bad habits that gave him the idea for the juice he calls Rise & Shine.

“I really started making this for my friends in college as a hangover remedy,” he says to a laugh. “And being that the zinc in the mung beans is good for the reproductive system, my uncles and the men in my family love it, and that’s the reason I called it Rise & Shine.”

It takes the audience a beat to catch the joke, but he gets another laugh.

“So it’s not only a hangover remedy, it’s an aphrodisiac. You drink it, you’ll find out,” he tells them.

Awhaitey is like many entrepreneurs who respond to the needs of the people close to them — he discovered he could help and wanted to do more of it. After graduating from college in Virginia with a degree in nutrition, he returned to Vermont to help his mother run the Mawuhi African Market in Burlington’s Old North End. He wanted to chip in with more than just labor.

“I wanted to have something convenient for people to have access to, to give them the nourishment that they need,” Awhaitey says.

That “something” is his home hangover remedy, of course — reformulated to be marketable for more than just recovering from a binge. Less than a year into his business, Awhaitey’s juice is the African Market’s second best-selling drink.

Offstage, Awhaitey says that’s what he’s most proud of: “The fact that it tastes good, and the fact that people love it.”

Awhaitey and 46 other local entrepreneurs are telling their stories this week for the fourth annual “Road Pitch.” It’s an invitation-only motorcycle tour of Vermont’s entrepreneurial spirit, organized by FreshTracks Capital, a venture capital firm based in Shelburne.

Awhaity, for example, is looking for mentorship and a little seed money to help him grow Healthy Kingdom into online sales and eventually to open his own retail locations.

And his process is one way that businesses are borne: People come up with a solution to their own problems, or their friends’ or family’s problems. They see that it works and scale up from there.

Josh Kenyon, a recent graduate of Champlain College, took another path. He’s the Road Pitch intern this year, and he was one of three businesses pitching at the Grand Isle Lake House Monday afternoon.

After his pitch, on the porch of the Lake House, Kenyon recounts how he came up with the idea for his business.

“At Champlain, I took an entrepreneurship class where the whole concept is to come up with a business plan on your own,” Kenyon says.

Meanwhile the riders inside tally scores from the pitch session to determine the “winning” business. The prize is $500, a Vermont Teddy Bear dressed up like a biker and the chance to pitch again at a bigger event this fall. 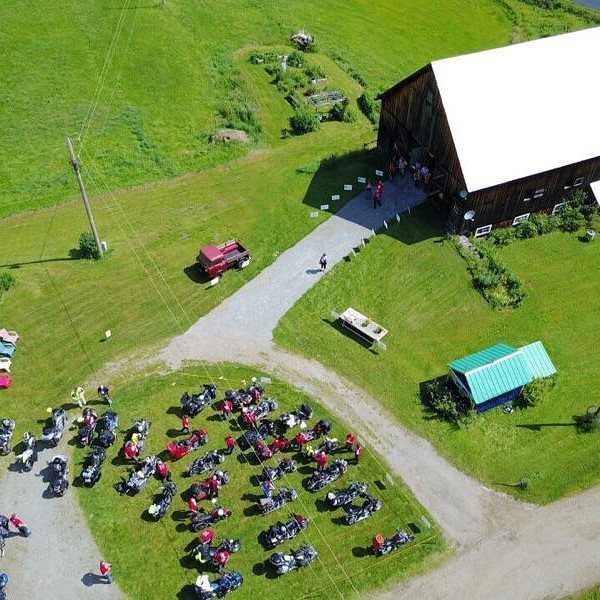 Kenyon is looking for help to create Modular Fitness Solutions, a company that will retrofit shipping containers as fitness rooms. His target market is small and medium-sized rural businesses.

“Right now if you want to go to a gym and exercise and work out, you have to actually go to a gym,” he explains. “And so, my solution was … what can I do differently to disrupt that market? And so I was able to say, what if I put a gym inside of one of these shipping containers … and leased it to businesses so that they had an on-site facility without having to build a facility on-site.”

Kenyon started out wanting to be an entrepreneur. He carefully observed the market he was interested in, and found what he believes is an opportunity to create something new.

Kenyon and Awhaitey didn’t end up winning their respective pitch sessions. The Grand Isle pitch winner was a company called Sustainability Benefits, and it comes from an entirely different approach. 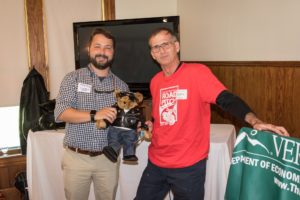 Sustainability Benefits is a spin-off of the Vermont Energy Investment Corporation, and it administers an employee benefit program that helps workers buy sustainability products, like electric cars, solar panels, bicycles or even local food.

On the Lake House porch, as the riders rev up for the next leg of their trip, Sustainability Benefits president Andy Vota explains why he thinks this genesis is cool.

“We’re taking something from this 30-year-old nonprofit that’s been around for a long time and done a lot of interesting things and had a really big impact,” Vota says. “And [we’re] taking this small piece of it, that we said, ‘Gosh, this is something that we can boil down, distill into a really scalable product that can have a great impact, and it can be a great business.’ And so we’re really excited about the opportunity to do that.”

Cairn Cross, a co-founder of FreshTracks Capital and the “father” of Road Pitch, says he thinks the diversity of these businesses’ origin stories is ideal.

“We have to make the process of entrepreneurship accessible to a hugely diverse group of people,” — Cairn Cross, FreshTracks Capital co-founder

Cross emphasizes this as one of the reasons that although the ride-along is invitation-only, the pitch sessions themselves are open to the public. He wants to pull back the veil on what it means to start a business, of any size. He wants Road Pitch to help people find their place in Vermont’s economy — by creating that place themselves.

It’s a lesson Peter Silverman and Max Robbins have taken to heart. The two are about to enter their senior year at the University of Vermont, and they’ve created a startup called Majorwise.

“We launched an innovative platform that connects local businesses with students for flexible projects and paid internships,” Silverman says in his pitch. “With our pilot program, we had 200 businesses on board. And this wasn’t just a free trial where people were posting jobs. This was 200 paying clients for our services.”

After their pitch at the Essex Junction session, Silverman was pessimistic about how they did, but Robbins was upbeat.

“I felt good about it. Our worst pitch was definitely Road Pitch of last year; it was pretty shaky. But this came together. I think it was good,” Robbins says.

Robbins was right: They took home the teddy bear Monday morning — a victory that exemplifies the impact Cross imagines Road Pitch having. Silverman and Robbins didn’t win their pitch session last year, but they took to heart the feedback they got from riders. They tweaked their business model, pitched at other events and kept pilot-testing.

“And then we were like, ‘man, this is extremely difficult for a business that wouldn’t even make like, $20,000,'” Silverman says. “So then we’re like, ‘all right, what have we done, what was the core? We found people jobs, we built some cool tech. Let’s do that, and like try to make it more profitable this time.'”

Three riders race a thunderstorm on their way from Grand Isle to Jay Peak as part of the fourth annual Road Pitch tour of Vermont. (Photo © Hilary Niles.)