Broadcast on Only A Game, from NPR and WBUR Boston 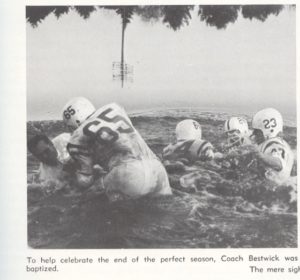 “When I was a teenager, my dad gave me an engraved silver bracelet from his days at Westminster College, a tiny Division III liberal arts school in Western Pennsylvania. I wore the bracelet for years — it’s made to stretch over any size hand. It’s engraved with Dad’s name: ‘Herb Niles: Co-Captain 1965 Titans.

“Growing up, this was one of the key things I knew about my dad’s life before he became my dad: He didn’t just play college football. He was co-captain of his college football team …”

This spring and summer, I had the honor of interviewing not only my father, but also one of his former teammates and their college football coach, Dick Bestwick, about the lasting bonds from their undefeated season in 1964. This is their story.

Buckle up your chinstraps and get ready for the za-zu-zaz.