Vermont Police Are Rarely De-Certified, Even For Crimes And Misconduct 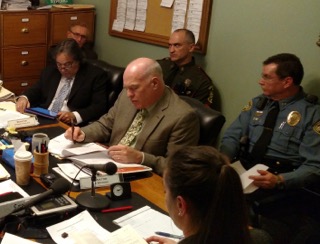 In December 2015, the City of Rutland, Vermont, settled a nearly $1 million lawsuit with a former police officer. Andrew Todd had alleged that two of his colleagues on the police force engaged in racial discrimination and multiple instances of improper conduct — including racial slurs and physical threats against him, racial profiling, and sometimes getting drunk or having sex while on duty. 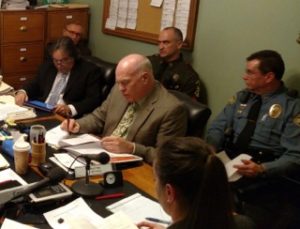 Law enforcement officers look on as lawmakers discuss a bill making it easier to de-certify police in Vermont for crimes and misconduct. (Photo by Hilary Niles)

By the time of the settlement, Sergeant John Johnson had retired and officer Earl “Frank” Post had already resigned. Although the two were never charged with any crimes, the civil settlement certainly was damning.

And despite the severity of the accusations against them, Johnson and Post walked away from their jobs with their police certification intact. That’s because, in Vermont, it’s really hard to lose your right to wear a badge.

This spring, state lawmakers are tackling a bill that would sharpen their teeth when it comes to dealing with bad cops.