The view from there: journalism from a policy perspective 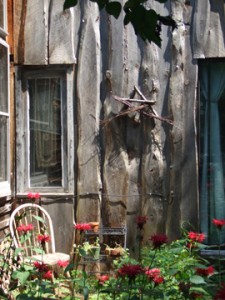 We get so accustomed to the homes where we live — be it a house, apartment, trailer, condo, shack — that it’s easy to take their appearance for granted and forget they may look different to strangers.

I used to live in a little cabin in the woods of New Hampshire. When I would come back from a walk, approaching the dirt driveway from the hill to its east, it was like looking at somebody else’s home. Instead of the fuzzy pink astilbe flowers, carefully tended hemlock trees and art glass hanging inside the sole window facing north toward the street, I would see the back side of the property: spare lumber, doors and windows that had been collecting for decades under the carport’s low, sloped roof. Piles of old, soggy hay in the woods where I had dumped the previous year’s insulation. (Since the cabin was built on top of sonotubes instead of a foundation, its pipes are exposed to the elements and would freeze in winter without a layer of skirting.) I’d see the roof of the storage trailer caving in and the screens of its windows flapping out — the same storage trailer I routinely forgot about, until coming home from a walk down the hill.

But that hill is where most of my neighbors lived, so the view from the hill is all they knew. They didn’t see the cabin from inside: the deep porcelain double-sink I had installed, surrounded by a handmade counter. The sturdy woodstove set squarely on a perfectly designed tile slab where we burned cordwood from our own woods to keep the cabin toasty even on the most frigid February nights. The paintings and artifacts from around the world that had been collecting for decades on the walls of the cabin — left by them men who built it, the boatbuilders who bought it, and the series caretakers like me who kept leaving the place a little better than we found it.

Here, framing is about how to structure a policy issue to attract the attention of reporters. Reporters are myopic servants of single-issue beats who simplify messages to fit the format of their media. Media are no more than businesses that lead with what bleeds and profit from conflict. And conflict is the enemy of compromise. Yet compromise is what solutions are made of.

In other words, the media, while essential, are also an intractable obstacle to constructive policy solutions.

Many criticisms of media I’ve read in the book “Agendas and Instability in American Politics” are spot-on. Some already are the subject of much grappling within journalism — or among some practitioners, at any rate. Such as the quick news cycle, and the way important issues often get bumped when the next big story comes along, never to be picked back up until they break the news cycle again with a controversy. (Yeah, I know the skylight’s leaking, but it’s only a problem when it rains.) We’ve talked in the Missourian newsroom about the value of follow-up reporting, asking “What ever happened to…?”

Other criticisms are insightful observations that help me see things in a new light. Take beat reporting. This system of developing subject expertise by focusing on one beat makes perfect sense to me. But I do see, now that it’s pointed out, how it explains “why a single issue is rarely treated systematically…” The line of inquiry a business reporter will follow covering the nuclear industry, for example, is going to reveal a whole different story than what an environmental reporter might drum up. Point taken. I’ll try to include reporters from other beats in my brainstorming process when I list the stakeholders of an issue I’m covering.

I think one other criticism, in particular, misses its mark at the same time it points to the greatest potential for journalism’s future: “Rarely do … the media focus for long on many aspects of the same issue. More often, things are considered piecemeal.”

Well, of course things are covered one at a time. “Journalism is a corpus,” editor John Schneller said last fall in a newsroom meeting. He meant that no one article can cover an entire issue, but that, taken together, a newsroom’s coverage of an issue can present it completely.

Apparently, the rest of the world hasn’t gotten this memo, which means that it’s up to us to deliver it. And perhaps in another blog post I’ll imagine how we might go about that. But, at the same time I think it’s important to convey this message, I also think we shouldn’t settle for piecemeal.

This is where I believe the promise of new digital platforms is richest. We can only cover the issues one at a time — with individual articles, stories, photo essays, video clips, info graphics and the like. And sometimes we get the chance to publish a collection of those individual “journalism units” as packages. But still, that’s one package, and most likely it only covers one aspect of a single issue. That’s how we deliver depth.

With digital platforms, though, I see no reason why we have to store and archive our reporting in individual pieces, or in the same format in which they are released. When I close my eyes and imagine the journalism I want as a consumer of news, I picture a platform more akin to a wiki page (but much better designed). A topic’s explanation would be continually rephrased to reflect its most current conditions.

This means more than tagging a new article or graphic with “tax incentives” so  someone can search for that tag and see whatever has been published about it. It’s the job of a whole other editor, who would be responsible for folding newly published work into the existing descriptions of the topics included in the reporting. Previous iterations of the overview, and the individual units on which the it is based, would be archived and easily accessible.

This format would let audiences choose between both breadth and depth — and cursory summaries, because those are useful, too — depending on their own needs at any given time.

In other words, journalism would become more truly a corpus, an integrated and evolving body of work — not just a collection.