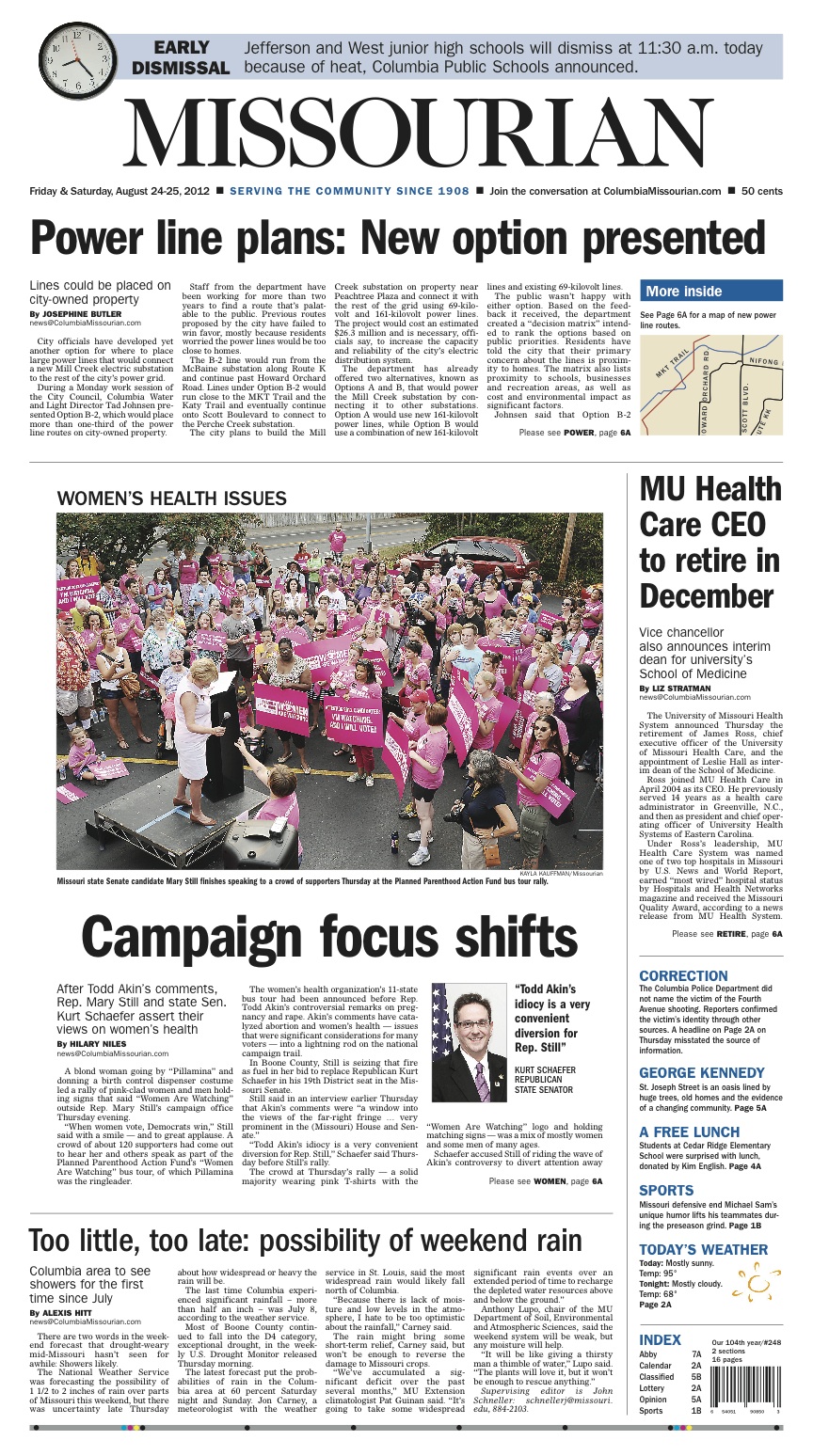 “When women vote, Democrats win,” Still said with a smile — and to great applause. A crowd of about 120 supporters had come out to hear her and others speak as part of the Planned Parenthood Action Fund’s “Women Are Watching” bus tour, of which Pillamina was the ringleader.

The women’s health organization’s 11-state bus tour had been announced before Rep. Todd Akin’s controversial remarks on pregnancy and rape. Akin’s comments have catalyzed abortion and women’s health — issues that were significant considerations for many voters — into a lightning rod on the national campaign trail.

In Boone County, Still is seizing that fire as fuel in her bid to replace Republican Kurt Schaefer in his 19th District seat in the Missouri Senate.

Still said in an interview earlier Thursday that Akin’s comments were “a window into the views of the far-right fringe … very prominent in the (Missouri) House and Senate.”

The crowd at Thursday’s rally — a solid majority wearing pink T-shirts with the “Women Are Watching” logo and holding matching signs — was a mix of mostly women and some men of many ages.

Schaefer accused Still of riding the wave of Akin’s controversy to divert attention away from her lack of leadership.

“We need to focus on economic development, job creation, public education funding, all those things I have been working so hard on for four years in the time that Mary Still has done nothing,” he said.

But Still said Akin’s comments have focused attention on an issue that some would rather avoid. She said Schaefer doesn’t want to talk about women’s health because he has a record of not standing up for women and that he doesn’t understand women’s health as a fiscal policy issue.

“The ability to plan your family provides you an opportunity to provide for your children in a way that will ensure that they have a better future,” Still said. “And certainly, reproduction” — including the option for a woman to choose abortion — “is a health issue for women as well. … Access to contraception and emergency contraception prevents abortion,” she said.

But the difference between Still’s and Schaefer’s positions on birth control can be hard to find.

“Birth control is a medical issue and none of the government’s business,” Schaefer said. Access to family planning and contraception for both men and women is “an important part of anyone raising a family,” he said. “I absolutely agree with her on that.”

After hearing that Still had accused him of not standing up for women, Schaefer vigorously refuted the charge. He pointed to restored funding for emergency room rape kits and domestic violence shelters, protections for rape victims who become pregnant, and $8 million in funding for smoking cessation programs for pregnant Medicaid recipients as part of his record in defense of women.

There will be time before Sept. 12 for them to hash out their credentials for local women’s votes. Senate Bill 749, which would allow insurance companies to deny access to birth control for certain employees, comes up for a possible veto override that day. Both Still and Schaefer voted against the legislation, which passed nonetheless but was vetoed by Gov. Jay Nixon.