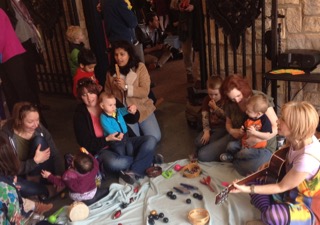 A new report on the health of Vermont’s children shows that 40 percent of the state’s children were deemed “not ready” for kindergarten in 2012-13. Almost one-third of third-graders read below grade level — a figure that jumps to 45 percent for children living in poverty.
The report, “How are Vermont’s Young Children?” published annually by Building Bright Futures, the state’s early childhood education advisory council, analyzes key factors that affect children’s health and academic success.

Children sang and played at the launch event for Let’s Grow Kids, a statewide public education campaign about the importance of early childhood experiences. Photo by Hilary Niles/ VTDigger

Vermont’s infant mortality and premature birth rates are very low, while the proportion of children with medical insurance is high, according to the report.

But two out of five Vermont kids under age 6 live in low-income households. And the number of children placed in protective state custody has increased 17 percent since 2002.

“Any business leader that does not think this is a huge business issue, candidly, they just haven’t done their homework,” Green Mountain Power president and CEO Mary Powell said Friday morning. She was speaking at Burlington’s Main Street Landing Performing Arts Center for the launch of a three-year, statewide public awareness campaign about early childhood development.