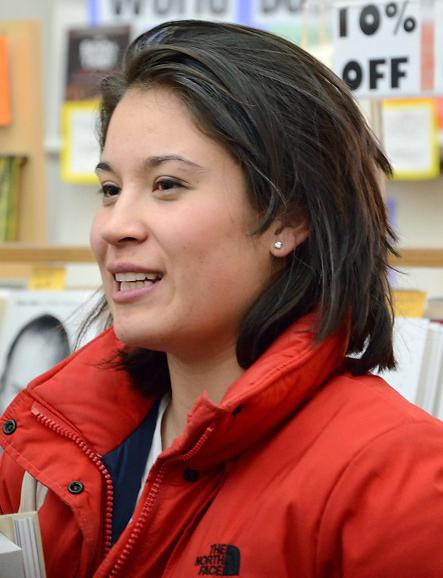 Brief profile as part of the American Next, a special project exploring the hopes, fears and changing expectations of Missouri’s next generation in challenging times. /539 words / The Columbia Missourian

ST. LOUIS — Brooks Yang may tell you that she’s “kind of doing nothing” these days. Don’t believe her.

Yes, the 23-year-old Princeton grad has moved back in with her parents after graduating last spring. No, she’s not working. And no, she doesn’t have plans to get a job in her field of study, architecture.

Brooks Yang at a book reading by Keija Parssinen of her debut novel “The Ruins of Us” on Feb. 19 at the Central West End location of Left Bank Books in St. Louis. (photo by Rick Agran)

In fact, she wants to be a filmmaker — a writer/director, specifically. She’s waiting to hear back from graduate programs for directing and screenwriting. When I met her in February, she was helping two installation artists with box office venue design for the upcoming True/False Film Fest in Columbia. She was also organizing a reading list for herself and taking two classes at MU, in accounting and economics — “to try out thinking in those ways,” she said.

Yang is making plans — and decisions.

She spent the first part of college “making the distinction between what it’s like to be good at something and liking being good at it. Like math,” she laughed.

She discovered her passion for art while in school: “When you feel like art has to be a huge part of your life, it’s hard, obviously, to live on that. But … coming to the realization I couldn’t live without it also is really interesting.”

Having studied planning in her architecture program, the American Dream is something Yang has given some thought to recently. It makes her think of property, Fannie Mae, a mortgage and a spot in the suburbs.

“For architects and urbanists, that’s a really difficult dream that’s been propagated among Americans, because it means you have these big spread-out cities, and it causes all these … green issues,” Yang told me. “And what seemed like such a dream — Los Angeles is a perfect example — today has become in a lot of ways sort of nightmarish.”

It surprises Yang now to see some of her friends from childhood settling down in these ways. “They maybe have a kid, and yeah, they’ve got that little house. They’ve got that spread-out suburbia kind of thing,” she said. “I think it caters to that dream that a lot of people still really hold to be true.”

All that said, Yang admits she would like to own property eventually — or at least be anchored and have room enough for a dog. That will come later, though. For now, she knows it’s a luxury to take the year off, and she’s making the most of it.

“But I did really struggle,” she said, recalling a graduation speech by New York Times columnist and author David Brooks she heard last year.

“I remember thinking he was confronting the idea that so many people my age have always been told, you know, follow your heart, do what you love and find yourself. But I’ve found that to be really difficult and that a lot of people in my generation find that difficult because it’s so self-focused. You don’t have a very good concept of the outside world, and … in some ways you don’t even know where to put yourself. … You know, maybe some people should be thinking more like, ‘Where do I fit into the bigger picture?’ as opposed to like, ‘What do I want to do?'”