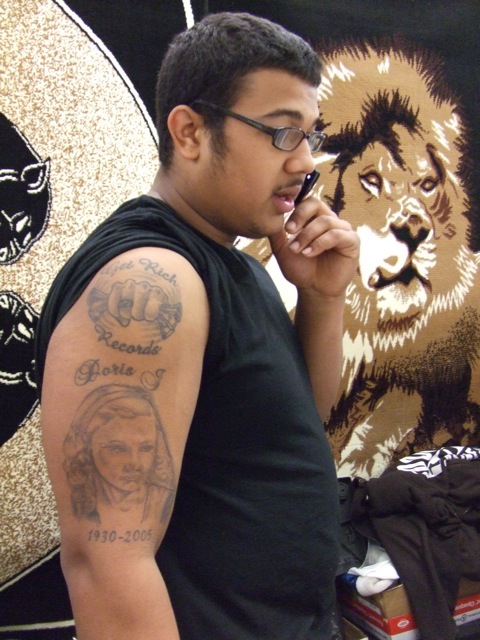 Work profile as part of the American Next, a special project exploring the hopes, fears and changing expectations of Missouri’s next generation in challenging times / 547 words / The Columbia Missourian

ST. LOUIS, March 4 — Eugene “EZ” Lacy assesses potential customers as they walk by his father’s flea market stall in a converted storage building in Jennings, a municipality in northeastern St. Louis County. A middle-aged woman with long hair, meticulously delicate eyebrows and frosted pink lips comments on the panther carpet hanging behind him.

She stops. She’s already got one at home, she explains, and the mirror that goes with it. She points to the two black panthers on their haunches, facing each other almost in silhouette against a golden-yellow would-be sun on black background. The carpet hangs sideways next to one with a lion, and another with a big cat.

“You can take this one home to have in case something happens to the one you got now,” Lacy says.

She’s not buying it. He tries again.

She’s friendly, but declines. She’s had hers for eight years, the woman explains, and it’s still in perfectly good shape. She doesn’t need a back-up. Her husband, tall with graying hair, smiles and agrees. They walk away.

Lacy is somewhat disappointed, but proud of his effort — a philosophy he tries to apply to whatever he’s doing.

“You’re never gonna get there,” he says. “You just keep trying. You’ll never get to the top. There’s always gonna be someone ahead of you, or right behind you.”

Eugene, 22, grew up in St. Louis County. He now lives in Moline Acres with his wife and two daughters, both younger than 4. For now, he is the sole breadwinner for his family, working full-time as a diesel mechanic.

He helps with his father Hank’s two businesses on top of that: Get Rich Records, a recording studio and record label, and Hood Depot, headquartered at this flea market.

They get people to their flea market booth by advertising custom business cards – 100 for $5. They make cards for hairstylists, DJs, handymen, churches, you name it. Once people come looking for cards, there’s more to buy.

The double-wide stall is a slightly cock-eyed array of blank CDs, wireless keyboards, rolling papers, sweatshirts, knitted caps, a hair pick, a piercing gun and body jewelry. Computer and printing equipment fill the shelves on one side of the stall, while a laminator anchors the other corner.

For the dozens of businesses lining the aisles of the market, little more than chicken wire serves as a ceiling. During business hours, the metal doors remain open, rolled up amid a mingled mayhem of rap and soul music, incense and bartering, bickering, blustering voices from neighboring stalls.

Eugene Lacy’s dream is to “make it big” as a music producer, but he knew it would be smart to have something to fall back on, especially with a family to provide for.

“If you think you’re succeeding, that’s when you slack and you drop off the map,” he says. It’s active striving that is Lacy’s American Dream. “Doing anything you want to be successful in,” he says.

Bill Gates, Donald Trump, Barack Obama. These are his models of success. They’re the type of people “who can turn something into more than what it started out to be, rather than stay at one pace or one speed,” Lacy says.