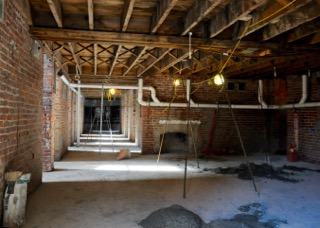 On Aug. 28, 2011, Tropical Storm Irene began flooding state employees out of their Waterbury offices and psychiatric patients out of their beds. 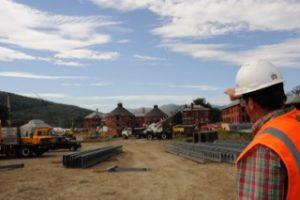 Three years after eight feet of floodwater forced the state out of its historic complex in Waterbury, Vermont’s largest ever capital construction project is well underway to bring the workers back. Photo by Hilary Niles

Three years later, steel beams three stories tall with cross bars at the top prop up faded brick walls from a courtyard. A mason from Irasburg fills ground-level windows with oversized granite bricks. A Monarch butterfly rests on a swaying stalk of tall grass that sprouted next to an oak tree circled in chain link fence.

The $95 million project — $125 million with design fees and other project costs factored in — started with demolition of 15 buildings a year ago.

Low-lying land near the Winooski River, where office buildings and a boiler plant once stood, now is sloped for stormwater runoff and has been seeded with grass. Pickup trucks, cranes and cement mixers track a dirt lane that soon will be built into a paved road about six feet higher.

Project manager Mike Stevens said on a tour of the site Tuesday that when the decision was made to rebuild at the same location, architects reconfigured the sprawling facility. New construction will be built closer to the quarter-mile long historic corridor, and on higher ground, to withstand a 500-year flood.